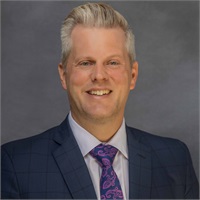 Andy grew up in Brooklyn Park, Minnesota and graduated from the University of Illinois at Urbana-Champaign where he began his studies in Aerospace Engineering.  However, his interest in business and his desire to help people led him to taking an internship with a financial planner in 1998 and changing his major to Economics.  He graduated from the U of I in 2000.

Andy moved back to Minneapolis, and in 2001 he began his financial planning career with Ameriprise.  He moved his practice to Waddell & Reed, Inc. in 2003.  He earned the CERTIFIED FINANCIAL PLANNER™ mark in 2016.  Then, in 2017 he earned the Chartered Financial Consultant® designation and founded Manifest Wealth Management.  At Manifest Wealth Management, we have a group of independent advisors offering securities and advisory Services through LPL Financial.

Andy is active in the Minnesota Chapter of the Financial Planning Association.  He and his wife Nichole and their children Zoey and Zachary live in Plymouth, MN; they are active in their community and in their church, Beautiful Savior Lutheran.

Hello everyone, Now that we're through the election I thought it would be a good idea to give a rundown on the results and expectations for the market and economy moving forward. I've attached a link for Brian Wesbuy's (Chief Economist...

Use This FREE Planning Tool To Find Out

2020 has thrown a monkey wrench into the plans and expectations many of us had. Use this FREE tool to see how close you are to hitting your financial goals and to create a financial strategy. Request a consultation with one of our...

Kevin grew up in Superior, Wisconsin and graduated from the University of Wisconsin – Eau Claire with a degree in Accounting. He previously spent more than twenty years with Traveler’s Insurance Co. in St. Paul MN in the...

Theresa joined the firm in 2014. She grew up in southwestern Minnesota with 7 sisters and one brother. She earned a Master’s Degree in English from Mankato State University and has worked in executive support for many years,...

Krista grew up and went to high school in Eden Prairie, Minnesota. After high school, she moved to Duluth and started college at the University of Minnesota Duluth (UMD). Krista has always had a passion for helping others, and while...

Zach grew up and went to high school in Mound, Minnesota. He graduated from the University of Minnesota, Twin Cities in 2016. After graduation, he began his career in financial services as a financial advisor with Edward Jones. He left...

Adam has more than 20 years of experience in the financial services industry. Adam is also a CERTIFIED FINANCIAL PLANNER™ (CFP®) professional and Chartered Financial Consultant® (ChFC®). Adam was born in outside of...